Breadcrumbs display a list of links to the current element and its ancestors in the top part of the page. 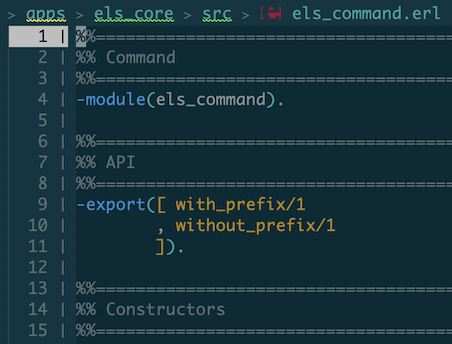 Breadcrumbs can be enabled or disabled via:

The settings section contains a number of additional preferences to tweak what to display exactly (e.g. icons, symbols, complete path to the file, etc).

Breadcrumbs are provided by the lsp-mode package. To enable breadcrumbs:

You can also customize what to display in the breadcrumbs by customizing the lsp-headerline-breadcrumb-segments variable. For more information please refer to the official lsp-mode documentation. Navigate to the definition of a function, macro, record or type.

Go To Implementation for OTP Behaviours

Hovering a gen_server:start_link call? Jump to the respective init function with a single keystroke.

Never remember the order of the lists:keytake/3 arguments? You are not alone. We got you covered.

Display warnings and errors from the compiler. Inline.

It has never been so easy to make Dialyzer happy. Hover a local or remote function to see its edoc. You will miss this feature so much when edocs are not available that you will start writing them!

Who is calling this function? Figure it out without leaving the current context.

Get a nice outline of your module on the side and jump between functions. Jump to the module you're looking for, in no time. For an overview of what Call Hierarchy may look like, have a look to this video.

To display the Call Hierarchy panel, right-click on the name of a function and select Show Call Hierarchy. You can use the newly opened panel to navigate through the hierarchy of calls.

To switch between incoming calls and outgoing calls simply use the phone icon on the top-right corner of the panel. 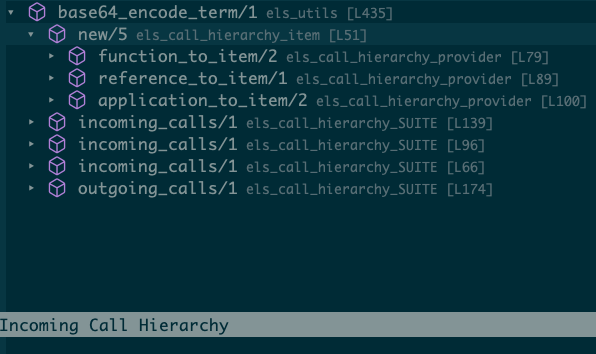 The feature is provided by the lsp-treemacs package.

To show the incoming calls hierarchy:

To show the outgoing calls hierarchy:

For more information please refer to the official lsp-treemacs documentation.