A couple of days ago, NextRoll announced rebar3_hank, a "powerful but simple tool to detect dead code around your Erlang codebase (and kill it with fire!)". In their original post the authors mentioned the overlap between rebar3_hank and some of the features provided by Erlang LS, such as detection of unused included files.

Intrigued by the new tool, I decided to look deeper into it, to check whether rebar3_hank could be integrated with the diagnostics framework in Erlang LS, to avoid duplicated efforts within the Erlang Community.

Both rebar3_hank and Erlang LS create diagnostics based on source code, but there are a few differences. For example, rebar3_hank acts on a project's code base as a whole, while Erlang LS operates on individual Erlang modules and their strict dependencies. Also, rebar3_hank is intended to be used as a CLI via a rebar3 plugin, while Erlang LS is a server which integrates with your IDE via the LSP protocol.

It was immediately clear that an integration between both tools would require a certain degree of refactoring. The ideas of rebar3_hank were quite interesting, though, and most of them would be easily implementable in Erlang LS. So, I decided to port one of them, detection of unused macros, and to take this opportunity to explain the process of contributing a new diagnostics backend to Erlang LS.

If you always wanted to contribute to Erlang LS, but you didn't know where to start, this post is for you. Let's start.

Given an Erlang module, we would like to be notified with a warning if a macro is defined, but not used. 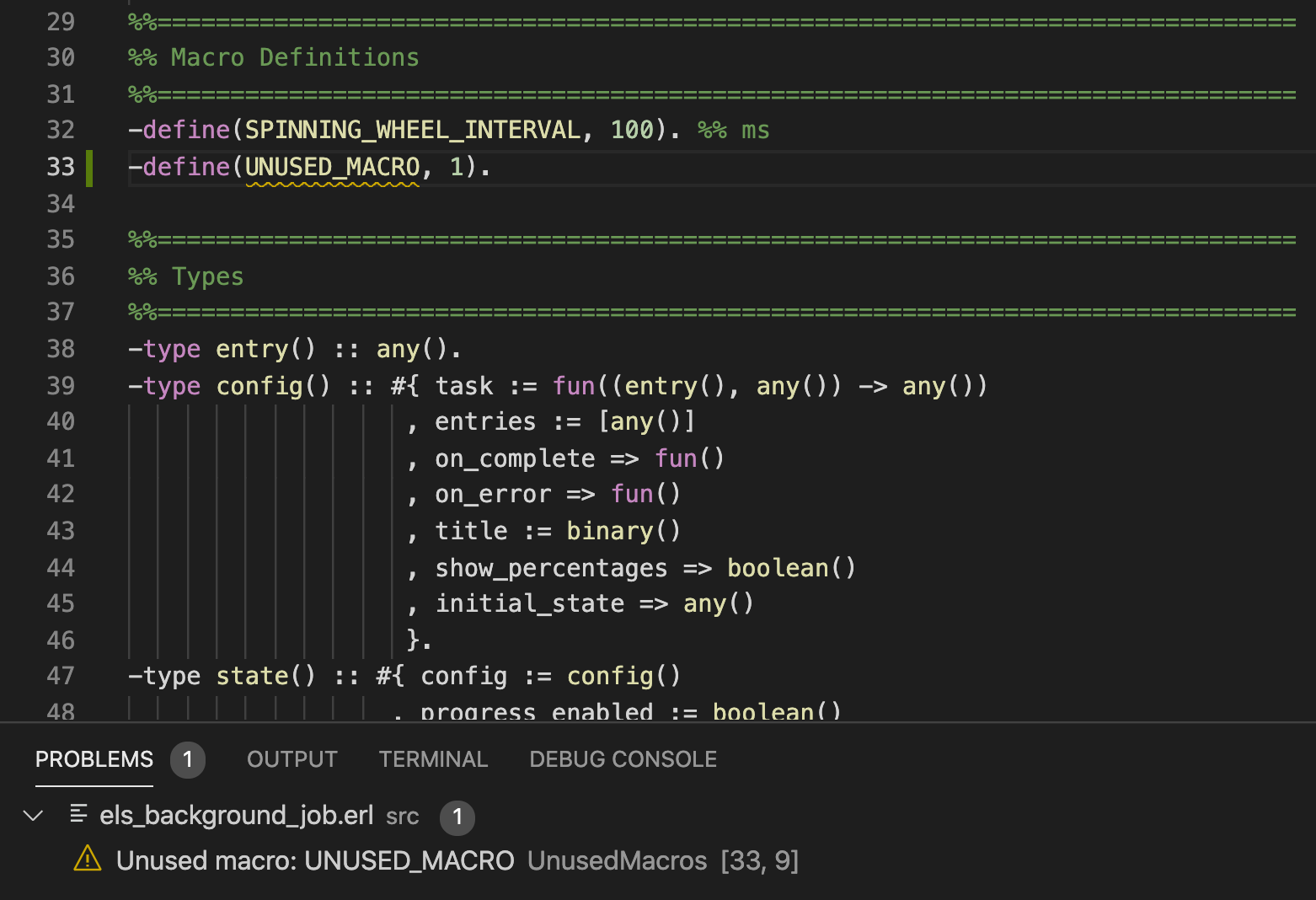 How can we make it happen?

The first thing we need to do is to define a new Erlang module which implements the els_diagnostics behaviour. By convention, all diagnostics modules are named els_[BACKEND]_diagnostics.erl where [BACKEND], in our case, will be unused_macros. So, the final name of the module will be els_unused_macros_diagnostics.erl. Let's open a new text file and add the following:

The els_diagnostics behaviour requires three callback functions to be implemented:

So let's add the following exports to the module. We will implement all functions in a second.

Should the end user decide to disable this backend, she can just add to her erlang_ls.config the following option:

Let's now implement our second callback function, source/0. This function returns the human-friendly name for the backend, which is rendered by the IDE (see the UnusedMacros text in the above screenshot):

The last callback function we need to implement is where the interesting stuff happens.

The function returns a list of diagnostics for the module which will be rendered by the IDE, in a format specified by the LSP protocol. Diagnostics can be of four types:

For the time being, let's return an empty list.

There's one more thing we need to do before we can use our backend in Erlang LS. We need to register it among the available backends. We can do this by adding an entry to the list of available diagnostics in the els_diagnostics module:

At this point, we could jump in and start implementing the body of our run/1 function. Then, to try if things are working as expected, we could:

This approach may even work, but it would slow down our feedback loop drastically and it would make the whole experience of contributing to Erlang LS painful.

Luckily, there's a better way: starting with a test case. After all, if we are planning to contribute our new backend, we will be required to add a test case anyway.

How do we implement a test case for such a feature, though? That sounds like a lot of work and we don't know where to start. Here is where the Erlang LS testing framework comes into play.

The first thing we need to do is to add a minimal example to the Erlang LS test application (which for historical reasons is named code_navigation and should be renamed). You can find it in the priv directory of the project.

In the above code, we define two macros and we use only one of them. We therefore expect a warning on line 6 for the UNUSED_MACRO.

We also need to register our minimal example into the Erlang LS testing framework. For that, we add a line to the list of sources in the els_test_utils module:

Now, we can focus on the actual test case. Since it's a diagnostics test, we can extend the already existing els_diagnostics_SUITE module. The test suite leverages the Common Test framework in Erlang/OTP, so please refer to the official documentation if you are not familiar with it.

First, we export the new testcase, which we call unused_macros:

Then, we can implement the body of our new testcase:

Lot of things are happening here, so let's go through the code together, starting from the beginning:

Here we fetch the Uri of the Erlang module containing our minimal example from the Common Test Config. This feels a bit magic, since we never populated that variable anywhere. What's going on?

Remember that we registered our new testing module in the sources/1 function above? That caused the Erlang LS testing framework not just to index that file, but also to create a couple of handy variables which can be used when writing test cases. [MODULE_NAME]_uri is one of these variables. Another one is [MODULE_NAME]_text, which contains the actual source code of the module. But let's continue with our testcase for now:

Since we want to test a new diagnostics backend, we subscribe to the stream of diagnostics, so that we can intercept and validate them. Again, we use a utility function which the Erlang LS testing framework provides.

We then simulate an IDE saving the file and wait until the diagnostics (which are calculated asynchronously) are completed.

The ?DIAGNOSTIC_WARNING macro is defined in the erlang_ls.hrl header file, so let's include it below the export list:

Let's now execute our test case and check the result. Notice how we need to specify a group for the testcase, since all Erlang LS tests can be run for the two LSP supported transports (TCP and stdio).

Not surpringly, the testcase fails, since we haven't implemented our run/1 function yet, but we are returning an hard-coded empty list. Let's fix that now.

We can finally jump to interesting bit of this tutorial, implementing a detection mechanism for unused macros. As usual, let's first look at the whole code and then explain its behaviour.

Let's now focus on the find_unused_macros/1 function. The goal of the function is to identify unused macros within a given document:

Again, lot of things happening here, so let's go through the code line by line.

First, we identify all the macro definitions, identified by the define key:

Then, we identify all the macro usages, identifie by the macro key:

You can refer to the els_parser module in Erlang LS for details about POIs (Points of Interests) and available keys.

For each macro usage, we extract the respective id and we return the list of macro definitions which do not have a corresponding usage:

The last missing bit is the make_diagnostic/1 function, which will convert each POI into a diagnostic:

This function is essentially a wrapper around around the utility function els_diagnostics:make_diagnostic/4. Let's analyze it in detail.

Here we convert the range of the POI (the unused macro definition) in the format required by the LSP protocol, using a helper function provided by Erlang LS.

We then build the diagnostic message using the id (the name) of the offending macro.

We specify warning as the severity of the message.

We invoke the source/0 function to specify the source of the diagnostic (for rendering purposes in the IDE).

We finally invoke the els_diagnostics:make_diagnostic/4 function with the constructed arguments to produce a diagnostic.

That should be it. Let's try to execute the testcase again:

Success! Tests now pass and we are able to identify unused macros in Erlang LS!

Here is the full implementation of the backend, for reference:

Of course, the implementation above is quite minimalistic and could be improved in many ways, but at this point you should get the idea of what it means to implement a new diagnostics backend for Erlang LS.

The above backend is already integrated in Erlang LS, but as an opt-in backend. You can see the whole contribution at:

Contributing to an open source can be a daunting experience, especially when you do not have an infinite amount of time available. I hope that this little tutorial can help you in that direction and I'm looking forward to the brilliant things that you can contribute to Erlang LS.